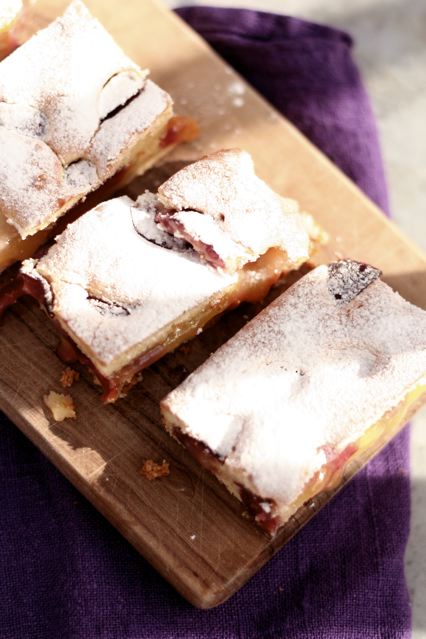 This is a lovely soft buttery pastry jewelled with sweet summer cherries and flavoured with kirsch or cherry liqueur. It's usually served just dusted with icing sugar but this time I added some home-made lemon curd to give it a tangy creaminess. You could serve it with lemon curd mixed with lightly whipped cream too or vanilla cream. Whatever you do it will be a delicious afternoon treat.

Preheat the oven to 180C. Mix the butter and sugar until smooth, light in colour and fluffy. Add the salt, lemon zest, kirsch, eggs and mix well until very smooth. Mix the baking powder with the flour and add it gradually to the mix also adding a little bit of the milk each time until all completely incorporated. Grease and line a 20x30cm brownie tray, pour in the cake mix and spread the cherries on top. Bake in the oven for 40 minutes or until cooked through. Cool and slice, dust with icing sugar. I cut each slice horizontally and spread a little lemon curd in the middle before sandwiching them together again. But it would be lovely to serve it with some lemon curd flavoured whipped cream too. 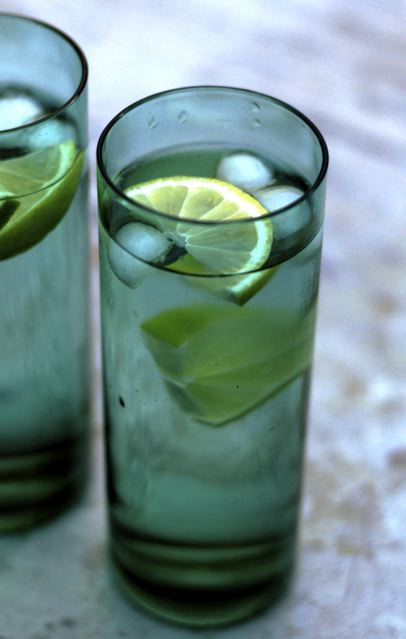 This is a fragrant, lemony and not too sweet cordial made from the humble elderflower. Plenty to pick from June onwards and it still amazes me how many delicious things you can make with a flower that is free to forage and so abundant this time of year. Make sure you pick elderflowers from bushes protected from pollution, on a dry day. Only pick fully open flowers that have not yet started to drop their petals. Shake the heads so little insects can drop and escape from the flower heads, but don't wash them as it will also wash away some of the fragrant pollen that would give your cordial that distinct lovely scent and flavour. Try to use it as soon as you collected them.
This recipe is for a larger quantity and it makes about 4 litres of cordial. But do half the quantities if you like according to your needs.
I don't use citric acid in my cordials for preserving as I freeze the lot in smaller containers and defrost one at a time, this will keep in the fridge for a few days no problem.

Put the sugar with 2.5 litres of water into a saucepan and gently heat until the sugar has completely dissolved. Bring to the boil. Add the elderflower heads and bring back to the boil, then remove from the heat immediately. Put the sliced lemons, limes and oranges into a big bowl or large pot and pour over the hot elderflower syrup. Stir and let it cool. Cover and leave it to infuse for 24 hours.
Strain through a fine sieve or muslin and store in small plastic bottles or containers in the freezer. If you wish to add citric acid, you will need 50g added at the stage where you mix the liquid with the citrus fruit.
Elderflower cordial makes a fantastic summer drink diluted with water or fizzy water or added to prosecco or champagne. You can boil it down to a thicker syrup too and use it for topping ice creams and puddings. Elderflower cordial can also be a base for ice cream, jellies, flavouring cakes or infusing strawberries in summer desserts. I recently made a lovely gluten free elderflower and blueberry almond cake from Scandilicious Baking it was really excellent.
Don't forget to revisit these bushes in the autumn when the elderberries are ready to pick. They make excellent jams and preserves full of vitamin C. Here is the link to my favourite elderberry jam recipe. 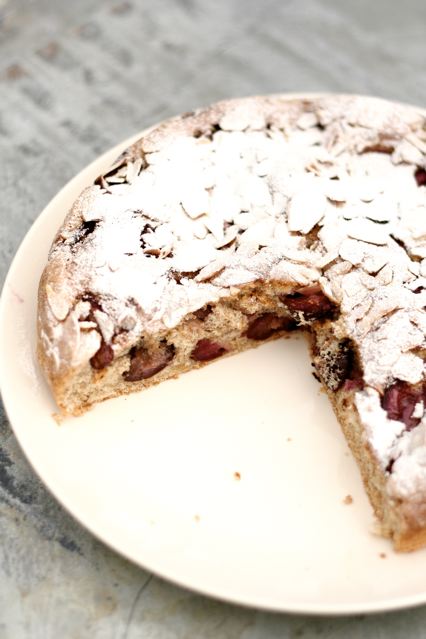 A very easy and quick summer cake to make when there are plenty of fresh cherries around. Light as a feather and the almond sprinkling gives it a crunchy topping. Great with afternoon tea.
Cherry or morello cherry sponge cakes are very popular in Hungary and they are made in enormous trays. This is a smaller cake for a regular 23 cm spring form cake tin, but feel free to double the sponge mix if you wish to use a large baking tray.
I also baked a couple of excellent gluten free cakes recently which I will hopefully make again. Both made with ground almonds (or almond flour) and flavoured with elderflower/orange. That reminds me of sharing my recipe for elderflower cordial soon, it's high season for picking them at the moment!

Preheat oven to 180C. Mix the egg yolks with the caster sugar until smooth and pale in colour. Add the water, almond extract and mix well. Add the baking powder and flour gradually and mix well. Beat the egg whites until stiff peaks form then fold in gently a spoonful at a time until all of it has been incorporated into the sponge mix and it has become light and airy. Pour the mix into a greased and lined spring form tin. Sprinkle over the cherries and then the almonds and bake in the oven for 30-40 minutes or until cooked through and golden colour. Dust with icing sugar and serve with thick vanilla cream. 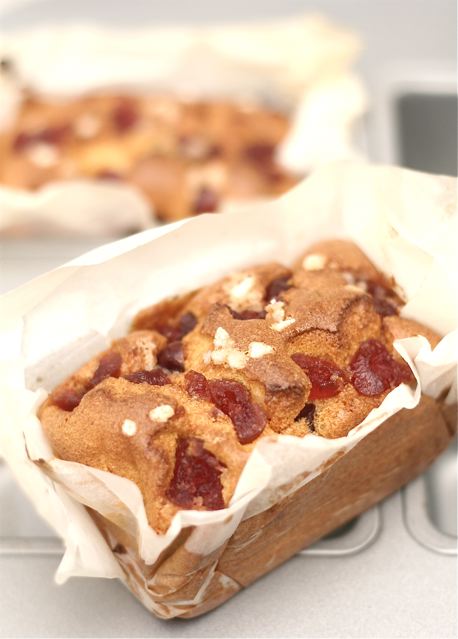 I have been longing to use this mini loaf baking tray for a while and was trying to come up with a good bake to go with it. Looking through my leftover winter baking ingredients I found marzipan and glacé cherries that needed to be added to a cake at some point. The sponge mix recipe is the one I always bake but instead of caster sugar, I creamed the egg yolks with the marzipan. It's really quick to make and you could substitute the marzipan with ground almonds and caster sugar and add any other dried fruit too.

Preheat oven to 180C. Separate the eggs and mix the egg yolks with the marzipan until really smooth and creamy and pale in colour. Add the water and almond extract and mix until smooth again. Add the baking powder and mixing it slowly add the flour a spoonful at a time. Beat the egg whites until stiff peaks form and very gently fold into the sponge mix a third at a time and mix until light and fluffy. Do not over mix as the air will have to stay in the sponge to get it light. Add the cherries and gently mix, leave a small handful to scatter on top. Grease the baking tray with butter and line with baking parchment each one generously. Divide the mix between the mini loaf spaces, it should fill them 3/4 full. Scatter the rest of the cherries on top and sprinkle with white crystals of confectioner's sugar. Bake in the oven for 35-40 minutes. These loaves freeze well too. Defrost completely and crisp up in a hot oven for 5 minutes before serving.
Posted by Unknown at 07:00 No comments: 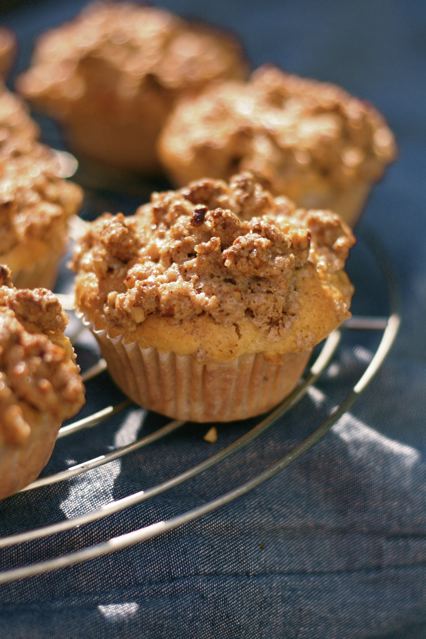 Muffins are one of the things I never had much luck with before. The recipes I tried were always a little bit disappointing, never tasted as good or looked as plump as they were supposed to. Going back to classics, I had a look through my Delia Smith books and found her basic American muffin mix a really good one, plus she had quite a few ideas for toppings, which are really so trendy again.
I love the crunchy streusel topping on her muffin cake, which I used in this recipe. It's a crumble mix made with sugar, butter, flour and nuts usually sprinkled on top of cakes in Germany, it gives an extra texture and nice rich looks to the muffins. I replaced the flour for spelt and made mine an apple-cinnamon version. All in all what can I say? Pippa Middleton eat your heart out, Delia Smith still rocks!

The secret of a good fluffy and light muffin is in the mixing. You must never over-mix the ingredients. For this reason it is suggested to sift the dry ingredients twice so that you only have to mix the wet ingredients in very little. This stops the flour activating too much, so as long as there are no white clouds of flour in the mix, don't worry if it looks a bit on the lumpy side, it's fine.
Preheat oven to 200C, gas mark 6.
Sift the flour, salt, baking powder, cinnamon into a bowl. Mix the eggs, vanilla extract, milk and melted butter in another bowl until smooth. Then sift the flour mix into the egg mix again and fold in with a wooden spoon very gently 10-15 times. Fold in the chopped apples gently. Spoon the mix into muffin cases in a muffin tray just enough to fill the cases. Make the topping by rubbing the flour, cinnamon and butter together until crumbly. Add the sugar and the nuts, mix well then sprinkle the water over the mix and press it loosely together. Sprinkle this over the muffins generously and bake in the oven for 30-35 minutes, until cooked through. Cool on a wire rack.

Email ThisBlogThis!Share to TwitterShare to FacebookShare to Pinterest
Labels: afternoon tea, apple, breakfast treat, brunch, muffins, pecans, vanilla
Older Posts Home
Subscribe to: Posts (Atom)
Welcome to my blog! Here you will find a selection of the most traditional Hungarian desserts and other sweet and savory dishes. Hope you enjoy reading through my recipes and maybe trying them at home. Please leave a comment I would love to hear about your baking triumphs (or disasters) or just to compare recipes, ingredients and swap baking tips!
Bea x

Other blogs I read regularly

Promote Your Page Too